Good Morning World and thank you Lord for another lovely day!!

As previously mentioned, Friday was planned to be a l o n g travel day…and it was!  Anchor up at 7:14AM and I hopped off the boat in Demopolis AL at 4:36PM!  While that may not seem like a long day to most folks (a few months ago it was “normal” to me too) – it WAS!!

But the weather was fantastic and we only had one lock to clear – EASY!!  However, the barge traffic was in both directions and we had 5 other looper boats in our group. A BIG thank you and hats off to the tow captains for their clear communication and their super kindness!

I was driving this morning and as boat #4 in a line of 5, I simply had to listen to the radio chatter and follow the leader…or maybe not.  When meeting a barge, the tow captain determines how he wants you to meet – on the 1 (European driving rules) or on the 2 (USA driving rules).  Boat #1 spoke with the tow and was instructed to meet on the 1.  Yay!!!

Of course the line of 5 boats spans a mile or so – so when I was meeting the barge there was a bend in the river to my port (left). Charlie showed up hearing all the chatter so he was able to speak with the tow.  As expected…I had to meet him on the 2!!  Cross the river in front of him to allow space for his load to make the turn. OK – I got this…putt, putt, putt at 8.5 mph I crossed the river channel , keeping the bow of our boat pointed directly at the front barge.  Once safely across, I turned slightly starboard (right) and proceeded south with plenty of depth…sounds complicated but it really wasn’t.  Sorry, no photo…in a moment of responsible thinking I kept my mind, eyes and hands on the monster in front of me!!

To show my appreciation, I radioed Capt. Earl Duvalle (I read the name on the tow) and thanked him for the easy pass.  He said, “Roger that, have a good one”.  I didn’t tell him my name wasn’t Roger…

My FAVORITE tow story of the day is about Big Eddie!!  He was southbound in front of us (the 5 looper boats) but we had several miles to the lock.  It’s protocol to not pass a barge unless they are at anchor but we were almost to an idle speed and gaining on him – and the other boats too.  So we requested permission to pass, he granted a “pass on the 2”.  Thanks Big Eddie!!

The closer we got to the lock we learned there was a barge already there & preparing to lock down. Commercial traffic has priority so….that would require us (all 5 boats) to wait for Big Eddie to catch up, load up in the lock, lock down, depart the lock chamber. The lock master would then have to “turn the chamber around” for us…about a 2 hour wait!  But wait…Big Eddie had the love of Jesus!!

He radioed the lock & told them to let us go down first, he would “hang out in the ch  God Bless Big Eddie – he made my day!!  I thanked him…and he thought my name was Roger, as well…go figure!
annel” until we were south. 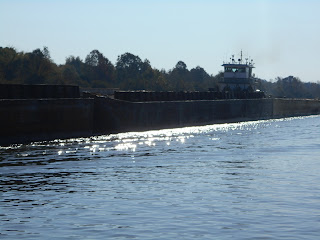 The landscape throughout the Alabama portion of the Tenn-Tom has slight variations and evidence or human occupancy!  The river homes are sometimes full time residence and sometimes hunting/fishing camp dwellings.  A few for sale signs were spotted, but the angle of the sun made it difficult to get a reading. 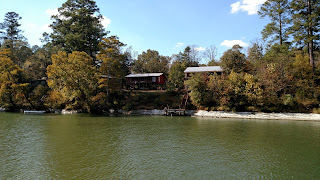 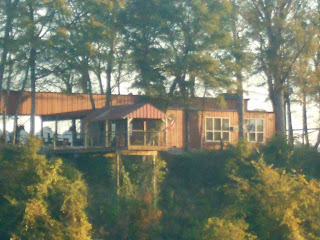 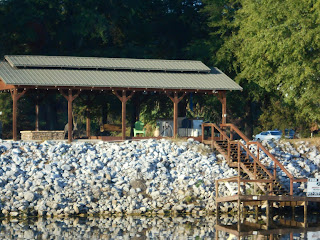 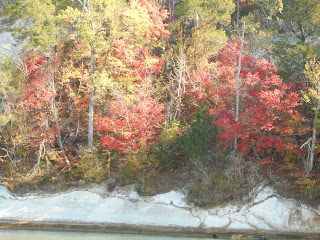 Then we saw the LIMESTONE river banks!! WOW!!! Ever wonder where that white rock comes from in driveways, country roads, etc?  I think I found it!!  Incredible – this went on for miles and miles! 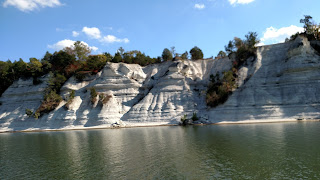 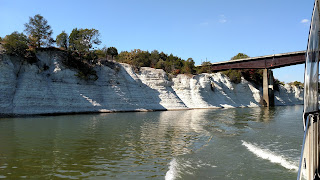 We left Columbus Marina on Wednesday at 7:30am my feet didn’t hit dry land until Friday at 4:36pm – you do the math, my brain is mush.  How did I cope?  GREAT…but I did dream about skiing in Colorado last night…and I did some “step ups” on the bow of the boat while locking through…and a 15 minute ab workout on the aft deck…and I cleaned bathrooms and dusted the boat this afternoon while Charlie drove.  See? No problem…LOL!!!

Tomorrow I will hit the walking trails and maybe get the bike off the boat for a spin around town.  But all in all…it was a GREAT DAY!!

Posted by Robin on The Lower Place at 6:00 PM