Closer…closer…closer
The countdown is REAL!! Contrary to prior plans, our departure date had been adjusted to…OCTOBER 23rd!! Yep, 10 days and counting!!  And we are more than READY!!!  The boat has been organized and re-organized and then just for good measure, an updated organized review.  And still I have a load of items to return to the house…it amazes me how boats stay afloat with all the “stuff”?!?

Today was serious haircut day too.  If you are in Fulton MS or happen to dock at Midway Marina on a Tuesday through Saturday check out Heavenly Spa & Salon!!  I had my second visit with Hanna today and once again, she nailed it!! I was looking for a shorter cut but one that would not look shaggy & ragged when it grew…it may be several months before a professional touches this head again!!!  She took her time, talked me through it and ta-da!!  Check out this pile of locks! 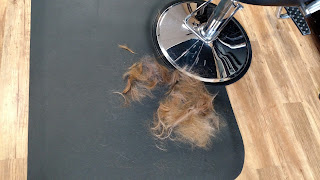 WOW!  Seriously, give Hanna a call – she was able to work me in for a next day appt.  Thanks Hanna!!!

We will be attending the AGLCA Fall Rendezvous at Joe Wheeler State Park next week and it looks like an action packed week. We are looking forward to seeing and meeting fellow loopers – some have completed the loop more than once and some are still trying to decide if they should/could really take the journey.  But most important of all…we will return to Midway Marina on Friday (late morning) and the fun (laundry, groceries, filling the water tanks, etc.) begins!  Because on Saturday we will turn the truck keys over to Ronnie & Julie for the next year then Sunday morning (probably much earlier than I want) we will throw off the lines & head SOUTH!!!  What a way to spend the Lord’s Day!  So thankful!!

I will have more to post tomorrow…because the population at Midway is GROWING with familiar faces returning for the winter!!  YAY!!!
Posted by Robin on The Lower Place at 7:58 PM