Same song, different day…we woke to fog, again.  But that was fine since we delayed our start a little bit.  The bridge construction (mentioned yesterday) was a communication whirlwind only to discover…it didn’t matter anyway!  The bridge tender said the pass was open, we arrived in dense fog & discovered – it wasn’t. Multiple radio/phone calls to the bridge, the barge and back to the bridge finally compelled folks to get busy - only an hour later.

The barge was moved from the passage and the bridge was opened manually!!  Did I mention the fog gave way to rain??  Only 90  minutes after we left the dock…we were moving again…what a great morning!!  So no worries…we were east bound on the Okeechobee Waterway – taking the rim route – due to the predicted winds across the lake.

Once the fog/rain gave way to sunshine the picture quality improved and we were cruising at 8 mph!! 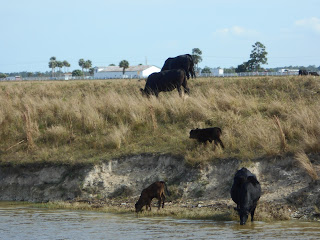 Around 3:00 we arrived at the Corps of Engineers marina at the St. Lucie lock…and the wind picked up, the skies darkened and we (along with Rascal’s Retreat) snagged the last two available slips!!!! Who says God isn’t looking out for us??  Now, docking was quite an event but both boats were able to safely get docked & tied (multiple attempts)!!  Thirty minutes later the dark sky turned blue, the wind was non-existent and the water was like glass…but we conquered the challenge of windy docking (for this time) & enjoyed a fabulous sunset!

We will be here for the next 3 days or so preparing for our trip over to the Bahamas!! So I may be off line for a few days..unless you really want to know about our trip to the customs office, grocery story and any other random errand we may encounter. Yah, I didn’t think so….

Embrace everyday and every weather opportunity…it’s God’s way of saying…”remember me??”

Keep smiling & God Bless!
Posted by Robin on The Lower Place at 5:22 PM