Ok, first things first…we are in Beaufort (BUU’fort) SC NOT Beaufort (BOW’fort) NC – we never want to offend our host city!  With that announcement out of the way, how ‘bout this weather?!?!?

We pulled up anchor this morning & headed to Beaufort – bypassing Savannah due to the lack of good/deep water approach & the impending severe weather.  The clouds gave way to sunshine and the waterway was busy with commercial traffic.  Based on radio communication everyone was trying to get to their destination before the afternoon severe weather alerts.  Schools dismissed early so we found this photo op a little amusing…

We crossed the GA/SC line somewhere around Cockspur Island and stayed on the “inside” (Intercoastal Waterway) past Hilton Head Island.  All was well until we started across the Harbor River toward Parris Island…hang on!! 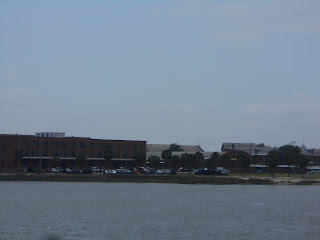 We went from a small chop on the water to at least 3-4’ WAVES!!  Crashing waves!! Salt-spray-up-to-the-fly-bridge waves!  I-got-wet-filming-this-20-second-video-from-the-fly-bridge Waves! But as the old saying goes…Your boat can handle it. Can you?  Yes we can, today!!! It only lasted a couple hours and the current was with us – it was more exciting than scary.  As we turned into the river channel, the waves calmed and we were in a no wake zone for the remainder of the trip.


<ed note: due to limited internet access the video is unavailable>
So, all the weather wizards are predicting the end of time (it’s good for their ratings). We are safely tied to the dock at the Beaufort Downtown Marina for the next 2 nights (Wed & Thurs).  And since the area is full of stuff to do within walking distance, we may stay a few extra days and support the local economy.

As a bonus…this place is full of loopers and other boaters we’ve met along the way!  It’s been a mini reunion since we docked…fun times!!

May you have a blessed Wednesday and stay safe!

God Bless!!
Posted by Robin on The Lower Place at 1:44 PM