Well, so much for the best laid plans…that’s why we L O V E a plan B and then a plan C!!  We are…still in Mobile!! Tied to the wall on the back side of the Convention Center!  YAY!!

We headed out Monday morning to the municipal marina in Fairhope as planned.  Moni Jean left a little later and headed to the “pier in Fairhope”.  Both places a NO-GO for different reasons but the main issue is lack of water in the slips.  Once we tied up another boater told us we would “be in the mud by morning”.  “Nuf said…we politely unhooked the power and pulled our lines – we don’t have 4-wheel drive on The Lower Place!  Moni Jean had good water at the pier but there was no availability.  We all headed for the Convention Center!
Walter the security guard met us at the wall.  We filled out the necessary paperwork and headed to downtown Mobile.  It’s been many, many years since I’ve been in the downtown area…a lot has changed.  There is evidence of improvements but mostly I was surprised by the very large commercial buildings standing empty with for sale or lease signs in the windows.

We found the post office (a standard trip for me) and a few side streets that had the smell of New Orleans. Mobile is the birthplace of Marti Gras after all. 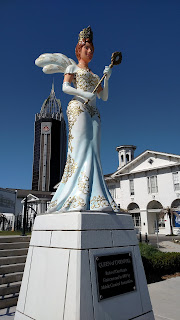 Since docking this far north on Mobile Bay we are rethinking our strategy of heading north.  Remember I mention there was a few boats heading north on Monday?  Well, their plans changed too…they are still at Dog River!  I have a strong suspicion that we will blaze a trail north in the morning…but I also thought I’d be in Fairhope this week!!  Proving once again…plans will change!!

Today’s thought:  you really don’t need yoga to be flexible; you need to travel on a boat!! LOL!!!  Laughter makes it all better so keep laughing!!

Posted by Robin on The Lower Place at 5:52 PM