Brrrrr…..STILL cold in Mobile AL.  We departed Turner Marine Wednesday (12/2/2020) at 8:27am.  It was almost low tide so churning up mud was expected.  We waited in deeper water for Hearken to depart and said “see ya later” to Mona Gee – they will catch up in a week or so.

We were bundled up with all the canvas and isinglass fastened and the sun was shining.  Soon the greenhouse effect would take place, yay!!  We planned for a short cruising day – cross Mobile Bay, jump on the ICW, stop at Lulu’s in Gulf Shores for lunch then anchor before sunset.  That’s quite the checklist! And that’s exactly what we did!! 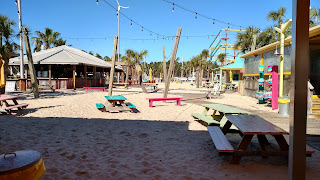 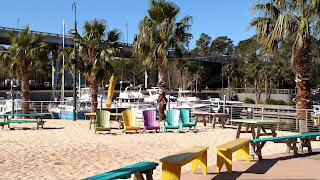 I know it’s December and it’s Wednesday and it’s stinkin’ COLD – but this is the saddest sight…Lulu’s without people!! We enjoyed lunch inside the porch and at a separate table from Hearken…it was nice to walk around the property.

Back to cruising east on the ICW passing by Tacky Jack’s, The Wharf and a left turn into Wolfe Bay.  We dropped the anchor at 3:15pm.  It’s still windy and sunny but the night will be calm and relaxing.

Posted by Robin on The Lower Place at 2:53 PM